For more information on Aspire Distributions, see also this page: Using The Maven Distribution ArchetypeThe previous quick-start used a pre-built Aspire distribution which was fixed for a certain set of components.In this quick-start, you'll learn

The "aspire" startup s a batch script (on Windows) or a shell script (on Unix) that can be modified as necessary if you want to assign more memory or need to set other JVM system properties.

Learn how to build an Aspire distribution from scratch

All of the components will be

Aspire is tightly integrated with Apache Maven, more so than any other software tool. New distributions are built using a Maven archetype and Aspire will automatically download components and application bundles stored in Maven repositories.

Step 3: Connect up to the Search Technologies Maven Repository

The version of Java you should use depends on the Aspire version you are targeting to:

We recommend installing the Java JDK (Java Development Kit), just in case you want to create your own Aspire components/applications in the future. But only the JRE (Java Runtime Environment) is absolutely required.

Now that you have Maven and Java (yay!), you will need to , let's configure Maven so that it understands where the Search Technologies Maven Repository is located. This is the location on the internet where all of the Aspire components are located. The URL is http://repository.searchtechnologies.com/artifactory/simple/community-public/. It is password protected.Note: You will need to use

If you have already completed this step, please go to Step 2.

Once After Maven understands where the ST repository is located, Maven can automatically download Aspire and all of its pieces automatically to create new Aspire distributions with a single command.

Now that Maven is installed, creating you can create a new Aspire distribution is relatively easyeasilyy. Our recommendations are to:

up see step for . "" someplace

The command should be executed exactly as is. Do not modify the parameters (; they specify where to locate the instructions for how to build a new Aspire Distribution).

Note that, sometimes, the "mvn" : Sometimes the mvn command will fail to locate the Search Technologies repository. (it It should be specified in your new settings.xml file.) . If this is a problem, add the following argument to the "mvn" command mvn command from above:

After executing the command, Maven will download a bunch of different JAR files. Most of these are various Maven plug-ins which that Maven itself requires to execute. These plug-ins are downloaded automatically from the "master maven repository in the sky", namely http://repo.maven.apache.org.

Finally, once after Maven itself is ready to go, you will be prompted for the following information:

Here is an example Example output:

So now you can run Aspire, right? Well, actually, there's one more step.

The purpose of the Maven archetype (the the previous step) was to build a Maven distribution project. Essentially, this is a template distribution. We will now need to Now let's use Maven to build the distribution itself.

Why is it so complicated?

Well, Aspire is meant for industrial-strength production installations. It is not a toy system. This means:

Okay, so let's actually build our Aspire distribution. Fortunately, this is very easy.

; this in step 5 execute

Again, since this is your first time executing running "mvn package", Maven will download a bunch of plug-ins, which it needs to do its job. But once after that's done, it will build the Aspire distribution and you're ready to go.

Messages that appear when building the distribution (optionally)

There are a number of warning message you may see when building the distribution. Don't let this worry you. Basically, if you see the following message, everything worked OK :.

for warnings you may see

This warning refers to the fact we don’t "hard code" the encoding for the ascii ASCII files we use. We tried to do this in the very early stages and it gave us more problems than it fixed. This shouldn’t cause any issues as long as you’re not working in any languages a language that use uses extended character sets.

We recently changed the build process so that you could include dependencies in the pom file to cause “application bundles” to be copied from Maven in to the target bundles/aspire directory at build time. This allows Aspire to use those application bundles on hosts which that do not have no internet access. You've always been able to do that with component bundles. The message below tells you that you’ve not got any you have no dependencies with the group id com.searchtechnologies.appbundles.

Some versions of Maven's mvn command (mainly 2.x) produce an unwanted file and copy it to the target bundles/aspire directory . This warning indicates that your version didn’t did not (as this line warns you the file is not being excluded when things are being copied to the target directory)

This warning just refers to the fact that the build is copying to a directory and therefore can not cannot produce something that can be place placed back in a Maven repository.

In Maven 2.x, you can get away with running the following command to build the distribution:

In Maven 3.x, you canYou can't run this command to build a distribution, so make sure you use mvn package as  (as detailed above) instead. If you do use install, the build will fail and you'll see the following :

What do we have?

The following diagram shows the directory structure you have created within your Maven distribution project so far: 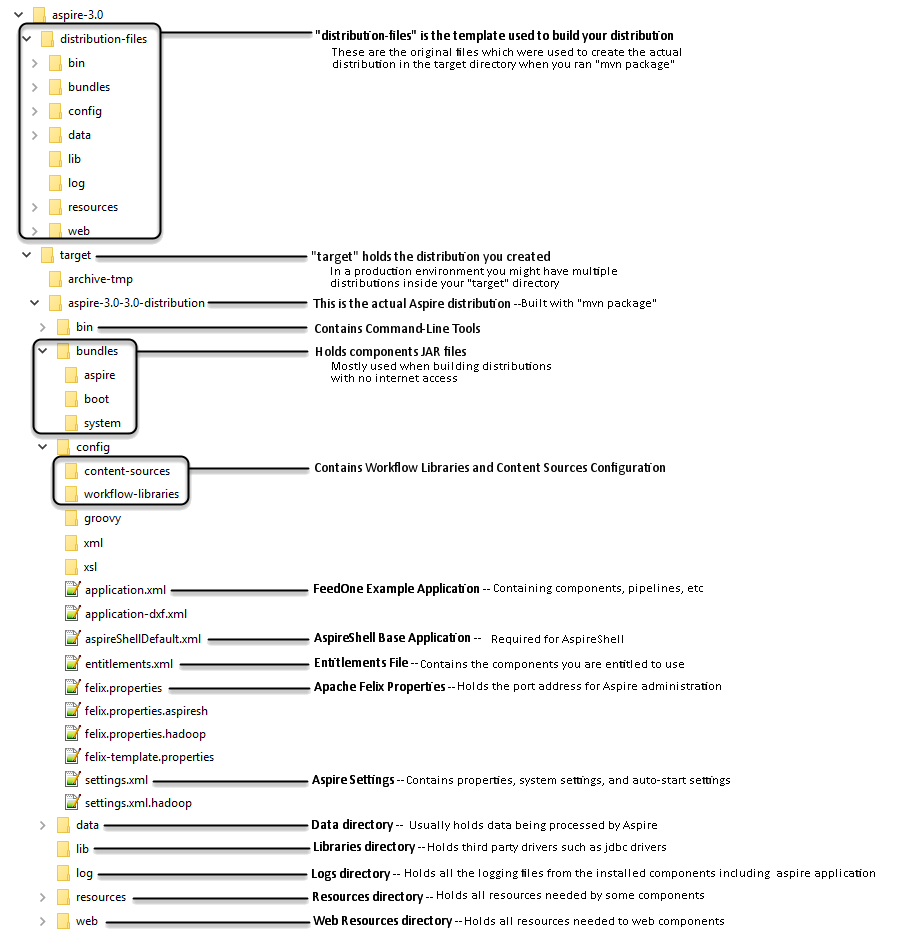 1. In the command window, change your working directory to: target\aspire-demo-0.1-SNAPSHOT-distribution

A simple application.xml file is provided with your application. Let's go to the debug interface and start it up to see what it does.

This will start up the sample application. Aspire will take a minute or two to launch the first time because (just like Maven) Aspire will automatically download components from the Search Technologies Maven Repository. These are stored in the Maven local repository (the .m2 directory) just like Maven does.

5. After the sample application is started, you can return to the debug console: http://localhost:50505/aspire

The debug-console provides status information and some low-level admin controls for Aspire. Through the debug console you can:

So you can see, the debug console contains quite a lot of useful functionality. Spend some time exploring it before going on to the next (and final) step.

Let's process a URL with the default pipeline.

, you should see the "Job status" table that indicates your job has been submitted to the Aspire pipeline.

Image AddedThe steps above submit a URL down the default pipeline, which will:

So, the pipeline doesn't actually send the document to a search engine to index it, but it certainly could. That would only take adding one additional stage to the pipeline.

The job should take only a small fraction of a second to process. You can see that it's done (and that everything worked correctly) by refreshing the page. If it was successful, you should see "Successful" in neon green text.

You can click on the "detail" link in the job status to see the results of the pipeline. What you should see (you may need to scroll down a bit) is an XML representation of Aspire's internal document structure, which contains the result of all document processing. It will contain a <content> tag which contains the text content (from the text extraction component), http headers and web server information (from communicating with the web server at at searchtechnologies.com), the <content> (added by the text extractor), and the <domainName> (extracted from the host name of the URL).

Where to Go From Here

where to go from here?

Congratulations! You have built a brand-new distribution of Aspire from scratch using the distribution archetype, and you launched the default Aspire installation and processed a URL. Cool!

Here are some suggestions on what to do next:

For example, the following is a minimal Groovy Scripting component:

You can add this component to your default Aspire configuration using the following steps: